Billing patients for outstanding balances after receiving the portion covered by the insurance company is known as balance billing.  This can happen if the insurance company gives less than the amount expected or if an episode of care is mistakenly believed to be in-network and hence expected to be covered by the insurance company.  Physicians who are not bound by the in-network rate agreements and are thus classified as out-of-network physicians, can bill the patients for the balance amount.  Unfortunately, there has been a rise in the confrontations between the out-of-network payers and the providers with regards to the reimbursements, resulting in some of them refusing to cover medical bills for members who receive out-of-network treatment by physicians at in-network healthcare facilities.  To help sort out the issue and ensure that patients do not face financial problems due to non-coverage, federal and state legislators are working with renewed vigor to find new ways to settle this problem.  Given below are some things that you should be aware of regarding balance billing.

On the rise across the nation
A nationwide study conducted by Consumers Union in 2015, found close to one-third privately insured patients were balance billed for medical services over the past two years.  In comparison, only about 8% patients used out-of-network care in 2011, with only 40% out of them balance billed.

Unaware patients
Network transparency with the patients is partly responsible for the rise in balance billing.  While many patients are unaware of having received out-of-network care, close to 70% of patients receiving balance bills which were unaffordable were not aware that their insurance plan network did not cover the healthcare provider at the time of receiving the care.

Are the ER physicians’ in-network?
If the hospital participates in an insurance network that differs from its subcontracted emergency physician, it can lead to the patient receiving a balance bill.  In 2011, about 68% of patients received out-of network care in an emergency situation.  Emergency situations can also lead to patients not having access to in-network care and hence forced to receive care from an out-of-network physician or facility, resulting once again in balance billing.

Low reimbursement rates force ER physicians to opt out of network
According to a survey conducted by the American College of Emergency Physicians in 2015, 20% of ER physicians said they were planning to or knew of colleagues who wanted to opt out of insurance networks. The single biggest reason, which was stated by nearly 90% of physicians, was the unwillingness of health plans to negotiate reasonable market rates for their services.

Choice of patients
The Emergency Medical Treatment and Active Labor Act require hospitals to provide care for any patient who comes in an emergency care situation.  This is irrespective of the patient’s ability to pay or not.  However, insurance companies are free to decide if they wish to cover an individual or not.  This also extends to their deciding which physician to bring into their network.  With insurance companies narrowing their network coverage of medical providers, it increases the chances of patients finding themselves in out-of-network situations.

Provision to eliminate surprise medical bills
In order to eliminate surprise medical bills, a provision has been included in the President’s 2017 budget proposal.  However, currently minimal details are available of this provision.  It seems that physicians providing regular services at hospitals will have to accept in-network rates for their reimbursement, even if they are not a part of that particular network. 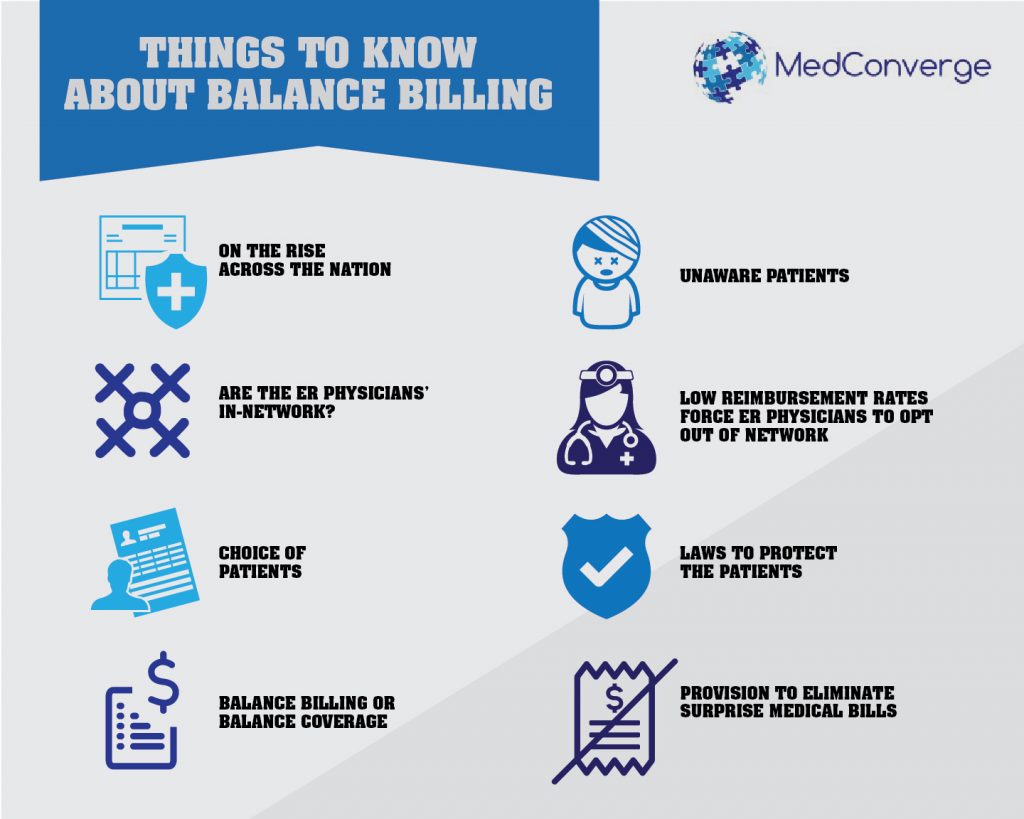 Do you need to change your Medical Billing Company? Sep 13, 2016