Drug addiction – a problem that most governments across the world are fighting to control, has not only become a major cause of death for the addicts, but is also responsible for neonatal abstinence syndrome amongst newborn children of addicts.  There are many ways in which people get addicted to drugs like opium and heroin.  Unfortunately, one of them is through taking prescription drugs given as pain medication.

Maine has the largest number of patients per capita who are on prescription for long acting opioids.  With around five deaths per week from opiate and heroin overdose, the legislature and governor of Maine, proposed and passed a bill, making Maine the second state in the country to make the electronic prescribing of controlled substances (EPCS) mandatory.  This bill also makes Maine the third state to require electronic prescribing.  Included in Maine’s new statute, “An Act to Prevent Opiate Abuse by Strengthening the Controlled Substances Prescription Monitoring Program,” is a number of provisions to reduce overprescribing of opioids, including limitations on duration and doses of opioid, along with mandatory medical education on addiction for the prescribers.

The EPCS requirement goes into effect from July 1, 2017.  According to Gordon Smith, JD, Executive Vice President of Maine Medical Association (MMA), the original bill limited opioid scripts to three days for acute pain and fifteen days for chronic pain.  However, the legislation mandates a limit of seven days for acute and thirty days for chronic pain on opioid scripts, with no restrictions on the renewal of the same.  The provision which was supposed to come into force from August 1, 2016 has now been pushed back to January 1, 2017.

Although the new law permits an average daily dose limit of 100-mg (morphine milligram equivalent) of opioids for new prescriptions, it allows 300-mg to patients already receiving drugs in excess of that 100-mg limit, but only until July 1, 2017.  However, according to the MMA, the state’s DHHS (Department of Health and Human Services) is expected to add more exceptions to this rule, by that time. 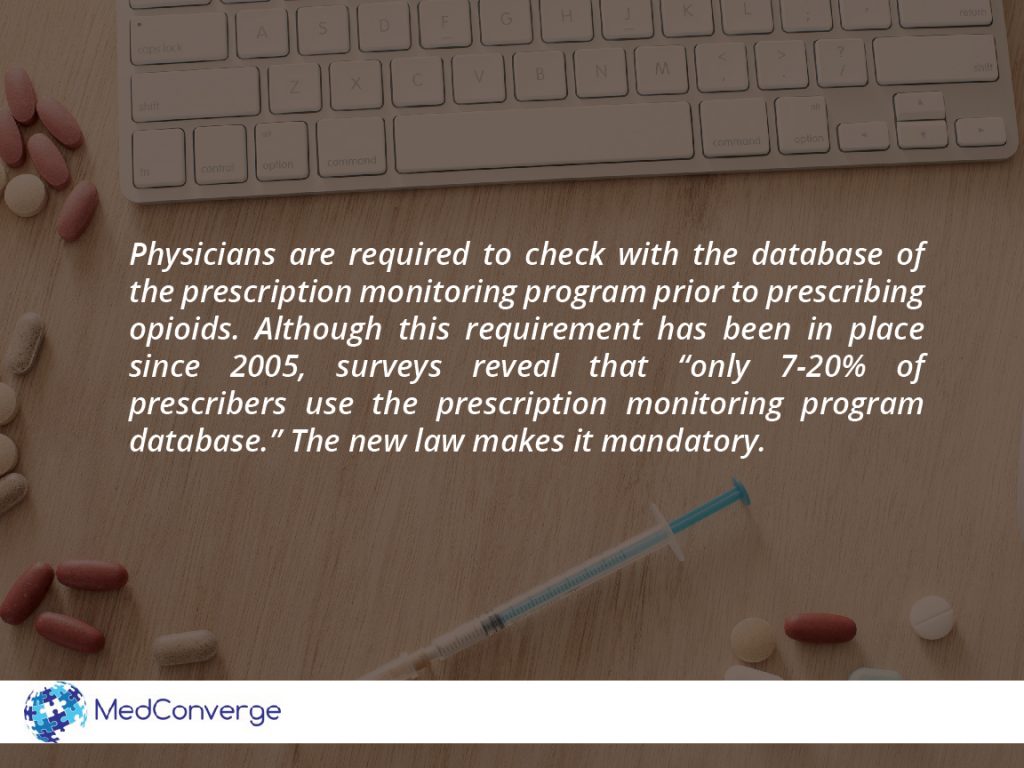 According to Gordon Smith, less than 1% of physicians in Maine prescribe controlled substances electronically; although most of them use electronic prescribing for other routine medications.  A large number of physicians are unaware of the Drug Enforcement Agency’s requirements for EPCS, he added.  There are other challenges that physicians in Maine will face in respect to this new law.  Software for e-prescribing through vendors certified by the DEA will be required as well as pharmacies will have to be equipped to accept EPCS.

The original deadline for mandatory EPCS was January 1, 2018 which has been pushed up by six months according to the suggestion of DHHS Commissioner Mary Mayhew.  The MMA, not sure if the physicians could match the deadline, agreed only on the condition that waivers would be granted to physicians not being able to obtain the proper technology on time or unable to access internet connections.  The MMA pointed out that the New York e-prescribing law was postponed for a year to allow physicians and EHR vendors time to make the necessary changes in order to be able to comply with the new law.

Physicians in Maine did not elicit any opposition t the e-prescribing mandate; in fact polling data collected by MMA revealed that physicians supported e-prescribing, mandatory CME and accepted the prescription monitoring program.  However, stating that it interfered with their medical decisions, physicians were not in support of the limitations on time and dosage that regulated opioid scripts.

Several exceptions have been sought by the MMA in the law’s provisions and although these have been granted, the MMA is still seeking more exemptions from the law.  According to Gordon Smith, the MMA supports the legislation in its final form and is satisfied with the balance between the patients need and responsible prescription by the majority of physicians.

Keeping track out new guidelines, updates in compliance while simultaneously ensuring that in-house staff is trained accordingly can be time consuming. Many practices find it easier, and cost effective to outsource their revenue cycle management services instead. Download the whitepaper which outlines the top 5 reasons to outsource your medical billing services.